Making playgrounds accessible for all 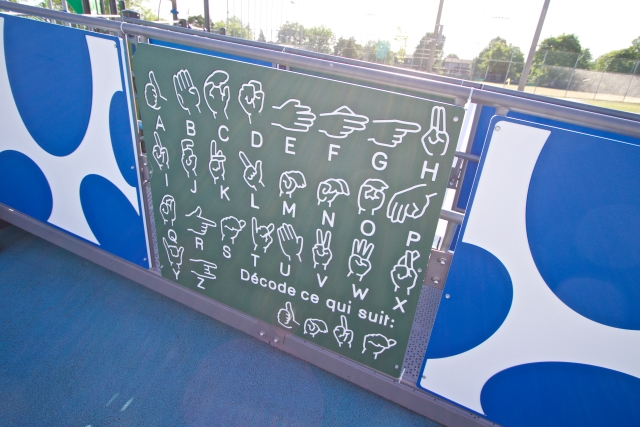 Who doesn’t love playgrounds or parks? For many special needs families, though, it is not so simple to find the ones that have the accessibility features they require to have a positive and playful experience.

Regular play is critical for children’s physical, social and emotional development. Beyond ensuring that structures are accessible, inclusive playgrounds also incorporate stimulation components for those with developmental or intellectual challenges. Examples include interactive sensory panels with brightly coloured dials, switches and textures.

While municipalities may strive to make parks more accessible by adding ramps and specialized equipment, other details need to be considered. One example is the adapted swing in Zainab Alsmadi’s neighbourhood park in NDG. The mom of four explained that while the swing is well-suited for children with reduced mobility such as her son, it is a challenge to reach it as the park is covered with sand and wood chips. The friction and drag make pushing a wheelchair difficult, as opposed to the smooth rubber surface many parks are transitioning to.

“The swing is right in the middle of the playground,” said Alsmadi. “So when I take my son to the park, I have to take the stroller down into the wood chips and manoeuvre his big stroller to the swing.” She often requires the assistance of other parents to do so. The lifting in and out is physically tiring, she noted, especially as her child is almost eight years old. “The best accessible playground would be where the parents don’t have to do a lot of physical moving around. I just want him to enjoy the park like any other kid.”

Municipalities in and around Montreal have taken some important strides in making playgrounds more accessible. Christine Latreille, writer and creator of Stroller Parking, a website dedicated to reviewing local parks, also assesses their inclusive attributes. Here are some of the geographically diverse gems she has found:

“Meades Park was the first universal/all-ability park for Kirkland and just one of a handful on the West Island,” wrote Latreille. There is a raised sand table, a wheelchair-accessible play structure, an inclusive spinner and a sensory wave boat. There are sign language and domino panels near the ramp, and one of the on-site washrooms is wheelchair-friendly. 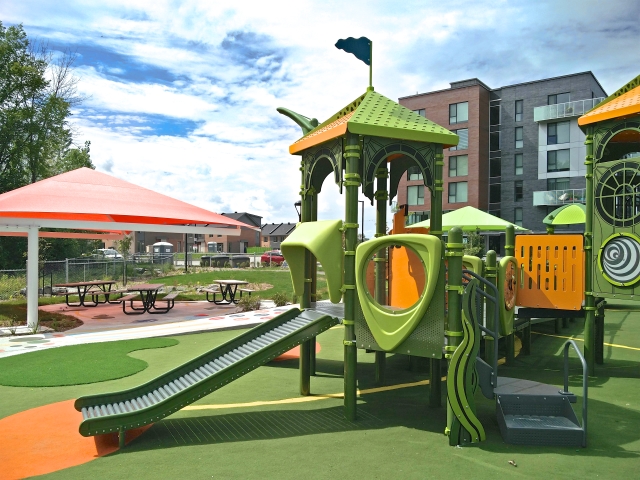 Opening at the beginning of the pandemic, the park has a wheelchair-accessible glider, double-wide ramps, sensory panels and a tandem or friendship swing. Picnic tables are accessible with a shorter bench on one side to allow children with wheelchairs to sit right at the table. Families with autistic children will appreciate rocking gliders for those dealing with sensory overload. The park is named in honour of the late Tony Proudfoot, a former Alouettes football player and Pointe Claire resident, who became a community advocate and speaker about ALS when he was diagnosed with the disease.

Ahuntsic Park (Ahuntsic-Cartierville)
“While I've seen quite a few wheelchair-accessible products with access ramps, they rarely have anything to actually play with,” observed Latreille. “Ahuntsic Park is a fantastic exception. Everyone will find plenty to engage them both on and below the raised ramp.” With sensory panels and tandem swings, kids will be entertained all day long. On hot days, they can enjoy the inclusive “rocking boat” and raised water table.

Wilson Park (Verdun)
“I saw the proposal for this park [in 2017]...and all winter I was like, ‘I hope Verdun does it right.’ And they did,” wrote Latreille. Wilson Park has an elevated sand and fossil table, an accessible sand shovel and winding paths. Ground-level sensory panels, adaptive swings and an accessible picnic bench are situated “right near all the action,” she observed. This helps bring all children together in a common play space. 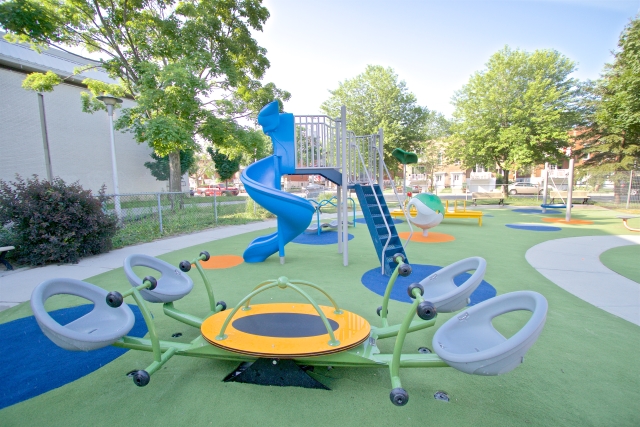 Perfect for little builders, the park has accessible sand shovels, stations with gears and chimes and intriguing sensory panels. There’s a cocoon area for quiet time, a wobbly ramp and an adapted seesaw. A fun sensory addition is a roller table fashioned with rolling metal tubes to slide down.

Ferland Park (Saint-Léonard)
One of Montreal’s first inclusive playgrounds, according to Latreille, the park has won awards for its inclusive design, especially for children on the autism spectrum. The splash pad has accessible activity panels, and it is even possible to borrow a water-adapted wheelchair.

Francis-Xavier-Fontaine Park  (Sainte-Catherine)
Besides “aiding in cognitive and physical development while also being wickedly fun,” Latreille writes that the park was named in honour of a little boy who saved his friend from drowning but lost his own life in the process. A highly accessible park with ramp access, there are adapted trampolines, a rocking boat for balance development and tons to do to “stimulate the senses,” including tactile panels and bongos to play.

Saint-Joseph Artisan Park (Salaberry-de-Valleyfield)
After local residents complained about the park’s inaccessibility, it was completely redone in 2017. It is accessible (though on wood chips), has an adaptive swing and a Sensory Wave Climber, described as “the industry’s first playground climber that allows children of all abilities to enjoy the benefits of climbing while enhancing sensory development.”

Inclusive parks involve kids of all abilities, allowing them to develop new skills and build community. Mom Alsmadi emotionally shared a memory of her son walking autonomously for the first time at an accessible park in the West Island. By holding onto handrails, “he discovered he could do something on his own–a sudden sense of independence.”

Share your favourite accessible park experience with us at info@inspirationsnews.com.