Benjamin Lachapelle brings animals to life through art and books 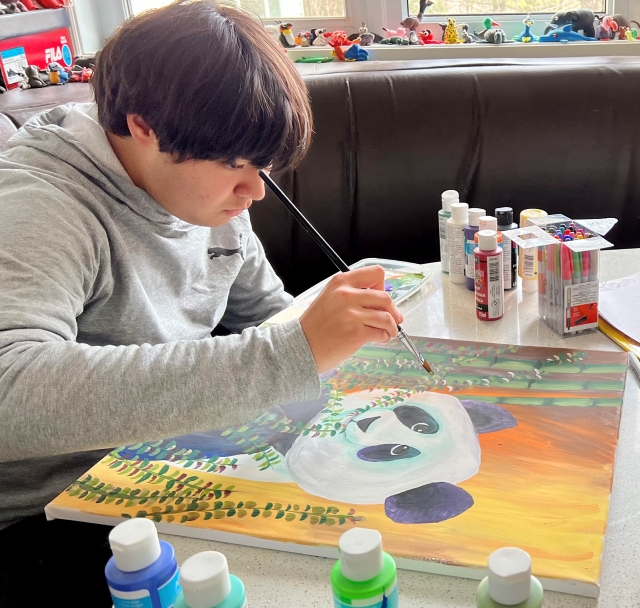 “I like winning,” said Lachapelle, who is thrilled to be recognized for his artwork on animals, which he hopes will inspire others.

“I’ve got nine favourite animals. I like zebras, dogs, ducks, tigers, elephants, cows, penguins, polar bears, and I like chickens,” he said in response to whether or not he has a favourite creature.

“I like the way animals move about, where they live, how they communicate and just everything about animals,” he added.
It was during his days at Laurentian Elementary School of the Sir Wilfrid Laurier School Board, that the now 20-year-old Lachapelle discovered his artistic gift, and his deep fondness for animals. And with the help of his community and his family, he has a strong team of supporters who’ve witnessed him grow as an artist.

“We are so grateful for this honour. Ben and I love the work we do,” said his mom Julie Chou, who is his closest teammate. “It brings us joy and purpose and is rewarding in and of itself. But being awarded for doing what we love is a completely new level of validation for us. The support and exposure this Inspirations Entrepreneurial Award brings will open new doors for Ben. It’s a win for everyone in Ben’s circle of support and our community in the Laurentians,” she said. She is co-founder of Autism & Arts in the Laurentians, along with Melanie Bujold. 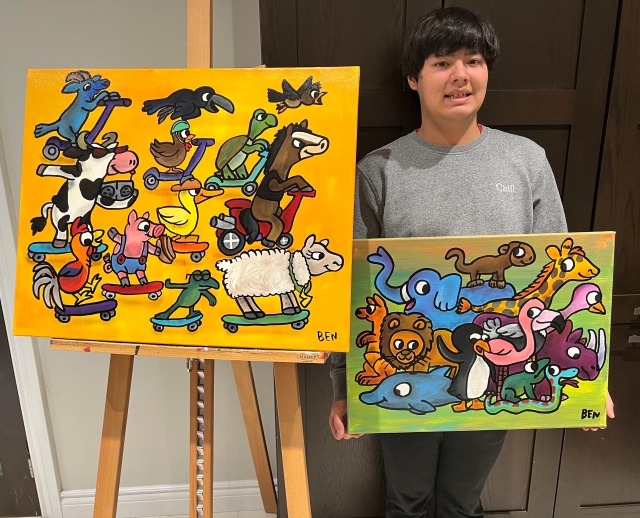 At age three, Lachapelle was diagnosed with autism. As he grew up, he developed a passion for drawing, painting and sculpting – and grew his talents. He is also an author and illustrator of several children’s books, including How Tall is a Yeti? available on Amazon. He has three signature styles of painting – Animalia, Extinction Protest Series and Ben’s World – which express his love for animals in unique and completely different ways, his mother explained.

A multidisciplinary autistic artist with a singular focus on animals, Lachapelle’s great imagination and work ethic have paved the way for success. His artwork is not just aesthetically appealing, it is expressive by nature as well.

“Ben also wrote some books which deal with the pandemic,” said Chou, who aids on the business and marketing side. “[He] was very fearful of needles. He wrote “Alpha Vaccination: An Animal Alphabet Vaccination Story after he got his first COVID-19 vaccination jab. It’s a rhyming story, which openly talks about feelings and emotions many kids have about vaccinations and the pandemic in general.”
(See p. 37.)

“As part of Ben Animalia’s social mission to promote autism acceptance and inclusion, Ben reads at local elementary schools and does sculpting activities with the kids. Sometimes Ben is the first autistic individual these students have met (and first autistic artist for sure!), and we feel a lot of pride and responsibility for these encounters. Ben also uses his artwork to raise awareness about wildlife, endangered animals and the environment,” Chou added.

On July 9 and 10 at Dunany Country Club, Lachapelle and his art are to be recognized at an exhibit called Festival Imagine, which anyone interested can attend. (See p. 38.) “It will feature six emerging and established autistic artists (Ben being one of them) and showcase a collective exhibition of student artwork,” said Chou. “It’s Autism & Arts in the Laurentians’ first arts festival, and we aim to make it a celebration of neurodivergent creativity, talent and diversity.”

“I was quite taken with Benjamin’s story, creativity and artwork. While committed to his theme of animals, he has expanded his craft to master figurines, paintings and writing and illustrating stories,” said Zavriyev. “He has the true makings of an entrepreneur with the diversification of his skills into several areas. It is my honour to learn about Benjamin and support his work with this edition’s Inspirations Entrepreneurial Award.”

In the meantime, Lachapelle has no plans to change what’s been a winning approach following his receipt of the Inspirations Entrepreneurial Award.

“I will continue to have fun and to work hard,” Lachapelle vowed. His work can be found at www.benanimalia.com, at Ben Animalia on Facebook or as @benanimalia via Instagram.

Nominate your entrepreneur at info@inspirationsnews.com.