Cooper ‘likes it loud,’ curious about new things as he thrives at PEL 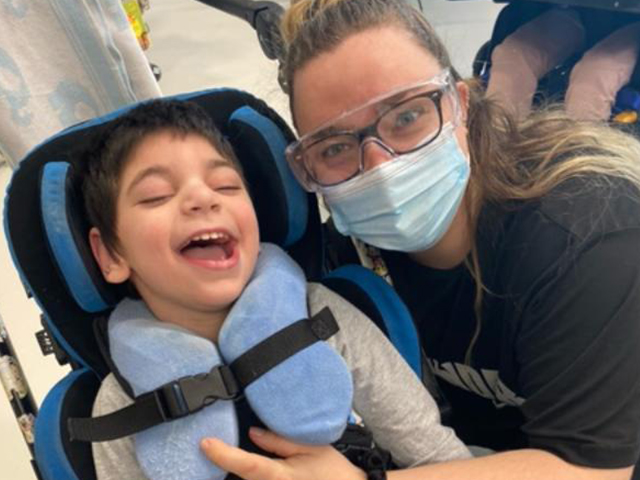 “In Montreal, there are only five of us,” said his mother Jennifer Ciambella, referring to the small number of families affected by FOXG1. And they found each other through a private Facebook page for parents, FOXG1 Syndrome Parent Support Group. It’s a place where you can ask questions and help each other out, and doctors even learn things there, she said.

There are approximately 760 people diagnosed worldwide with FOXG1, according to Jennifer Leonard, president and director of Family Advocacy International FOXG1 Foundation.

The family discovered Cooper had the syndrome when he was five months old during a routine checkup by a CLSC nurse. She noticed he “wasn’t crying properly” and sent them to the emergency room. After weeks of intensive testing, including genetic, and treatment, the senior pediatrician’s suspicion that Cooper had FOXG1 syndrome was confirmed.

When he was two years old, his parents opted to feed their son using a gastrostomy tube. He stayed home until it was time to go to school. With a vision impairment called cortical visual impairment (CVI), Cooper was eligible to attend Philip E. Layton School, where he’s been going since he was four.

“There are all different types of foxes,” explained Ciambella, of the wide spectrum of abilities presented by FOXG1. Cooper doesn’t walk, talk or sit up on his own. He can roll over. And how does he communicate? “With me, I just know,” she said. “I know by the sounds he makes. A mother’s instinct.” He recognizes voices and smiles when he hears his favourites. “When he hears my father on the speakerphone, he starts going crazy!”

Cooper’s teachers, Jennifer McLeod and Kimberley Young, both said they learned about FOXG1 for the first time when Cooper joined their classrooms. Along with his four classmates, he can engage in storytime and music, as well as be upright using a standing frame, fully supported and freely able to move his head, arms and legs. In a normal year, students would be using the pool, but for now there’s “swimming on the mat!” said Young.

He has one-on-one sessions with speech, music, occupational and physio therapists. “They do it all there. I am very lucky to have them,” said Ciambella.

Because Cooper is non-verbal and his movements can sometimes be involuntary – common in FOXG1 –  his teachers also had to learn how to communicate with him. Though he is on the CVI spectrum, Cooper has good vision and uses his gaze to make choices, explained McLeod. She said he can express himself using facial expressions, vocalizations and body language. The school will eventually introduce Eyegaze Edge, a technology that will help Cooper develop the vocabulary to communicate his own thoughts

Young said they often use colour, in objects, often musical instruments, as a way to communicate and elicit choices from the student. They start with red and yellow, considered “crisp colours” in CVI work, followed by other colours later on. At the time of the interview, Cooper was loving blue and orange. When given a choice, Young explained, he would choose to look at the blue drum and would smile.

His exposure to music has revealed that he is “so motivated by music and curious about musical instruments,” said Young. “He is a fan of big booming hip hop and Justin Bieber. He doesn’t scare easily. He likes it loud!”

Cooper had enjoyed swimming in the PEL pool before it closed, “But his ultimate favourite is the Snoezelen Room,” said his mom. “He gets so happy. I say the word ‘Snoezelen,’ and I see the smile.” She said he likes to play with the fibre optic strings and enjoys looking at the bubbles in the massive lava lamps.