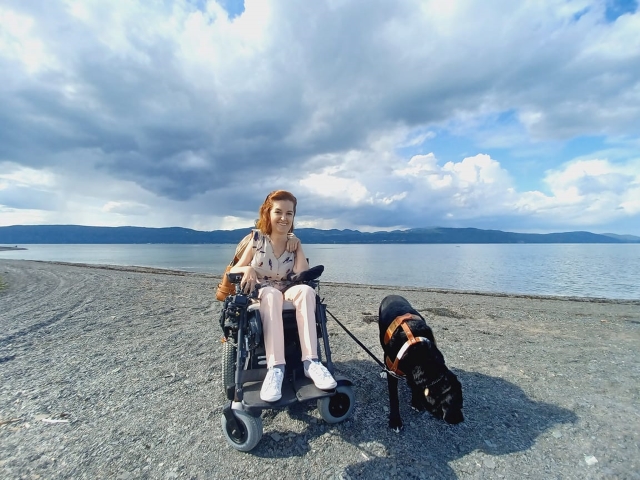 Catherine Bolvin and Moufle are on vacation in the Charlevoix in the summer of 2021. Photo courtesy of C.Boivin
/ Inspirations

Catherine Boivin has a smile in her voice when she talks about the Mackay Centre School, where she attended pre-kindergarten through first grade in the mid-1980s. “I was born with spinal muscular atrophy, which is a very rare genetic disorder,” Boivin said. “I got my first motorized wheelchair at Mackay and recall how much fun it was, learning to drive.” Getting around on her own provided a measure of independence and a boost to her self-confidence. “I remember the feeling of inclusiveness at Mackay and the positive, empowering atmosphere,” she continued.

“At age four, I decided that I wanted to play the violin, but with limited upper body function it seemed impossible. My mother was determined we would find a way.” With the help of a custom-built chair made by a Mackay technician, Boivin was able to assume the correct posture with arm support so she could hold the instrument. This made it possible for her to play and perform.

After leaving Mackay, Boivin continued her elementary and high school studies at Académie Michèle-Provost in downtown Montreal. “I transferred to Collège Jean- de-Brébeuf for my secondary five year. They had begun to integrate girls into the school a few years earlier,” she said. “My high school graduation was one of the first that included young women.”

Boivin went on to complete her two- year CEGEP program at Brébeuf before heading to the Université de Montréal and Concordia University for undergraduate and master’s degrees in theatre design. These multidisciplinary programs explored set, costume and lighting design. Her undergraduate program included a minor in art history.

“After university, I freelanced for a few years and developed my own style of 3D renderings [illustrations] of theatrical set concepts,” said Boivin. “In 2014, I was recruited by 4U2C Creative Studio, a subsidiary of Cirque du Soleil.”

“For the past couple of years, I have focused on my other passion – fundraising, advocacy and government policies for the disabled,” Boivin said. “I work with Muscular Dystrophy Canada and sit on the board of directors for the Canadian Organization for Rare Diseases.” She explained that a big part of both their mandates is to raise public awareness and lobby for government budget allocations. The goal is to provide equitable access to medications, timely clinical trials and therapies.

More than three decades after leaving the Mackay Centre School, Boivin has circled back. Since autumn 2021, she has co-chaired the Habilitas Foundation fundraising campaign for a fully inclusive playground at the Mackay Centre and Philip E. Layton schools, with the slogan, “Every Child Has A Right To Play.” Her co-chair partner is her father Pierre Boivin, Montreal businessman and former president of the Montreal Canadiens hockey team. Boivin and her dad have enjoyed working on the campaign together. The project is expected to break ground this spring, in hopes of being completed in time for the new school year starting in September 2022.

“My daughter Catherine is incredibly com- mitted to creating a better world for people with disabilities; she is a constant inspiration to her mother and me,” Pierre Boivin said. “I have done a lot of fundraising in my career but co-chairing this campaign with my daughter is the highlight of my philanthropic work. It feels great giving back to the Mackay Centre and Philip E. Layton schools. It’s the place that gave Catherine the right start in life and allowed her to blossom.”

Boivin is currently in reflection mode about what to do next. “During the pandemic, my path deviated from theatre design to advocacy for the disabled. I love making a difference in the lives of individuals with special needs but miss the creative aspects of my previous career,” she said. “Ideally, there will be a way to bring the two together – I already have some ideas in development.”