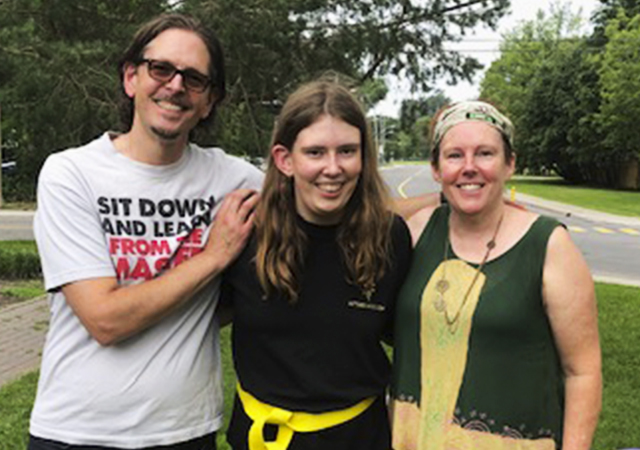 When veteran instructor André Langevin was first raising his son, he sometimes wondered whether the time-honoured martial art he’d mastered could also be used to improve the life of young Philippe who was diagnosed with autism.

Langevin quickly discovered that “yes,” karate was indeed a helpful tool in the development of his son, who, at the age of 5 didn’t know how to speak. Today Philippe holds a degree in mathematics from McGill University.

His father has no doubt that providing a specially modified form of karate training to autistic children, teens and young adults can help to improve their quality of life, while also paving the way to vast new possibilities.

Inspirations snuck in an opportunity to speak with Langevin during a break at an Autisme Karate session at Valois United Church in Pointe Claire on September 13, where he was scheduled to teach three more classes that day. In addition to the West Island location, sessions are also provided in St. Hubert. They were previously also offered at the Miriam Centre in Town of Mount Royal and will resume again in January 2021.

Langevin’s approach to teaching karate to those with special needs is relatively unique in that parents actively participate in sessions. As he takes the class through exercises and techniques, the parent works with the student, providing support and encouragement, while also helping build confidence.

Added to this is the ambiance of the sessions. Many of the parents spoke of the program as a “community” event, with everyone treated as an equal. Langevin, whose knowledge of martial arts goes back more than 30 years, has been teaching karate to persons with special needs since 2008. He believes that his own family’s experience with an autistic child provided him with an intimate understanding of the dynamics involved. Several instructors work with Langevin, including two who have black belts. He also has a black belt in karate, as does Philippe.

Among the nearly 20 parents, children and young adults who took part in the session at Valois United, the consensus was virtually unanimous – the program works. “Since he started this program, Andrew is more confident, more controlled,” said Judy Vargas, whose 16-year-old son earned his yellow belt since joining the program. Noting that Andrew has ADHD and tends to be easily distracted, she said that since enrolling in the program “he’s more with it.

“Now he has so much more balance than even we do, and he loves it,” she added. “This is the one activity that he loves to come to without fail.” Adds Andrew’s father, Al Hill, “It doesn’t take much persuading to bring him out.”

Rosie Saxe, whose 29-year-old son, Jason, is perhaps the oldest member of the Valois United group, is also pleased with the progress he’s made in the past six years. “He was very resistant at first due to anxiety,” she said, pointing out that Jason managed to advance to brown belt despite the early challenges. Saxe said she was particularly impressed by the community approach used in the program. “It’s family-style – supported by family instructors who have kids or adult children on the spectrum,” she said, adding that she was able to become an assistant instructor after a few years of participation. According to Saxe, the parent’s role in Autisme Karate is a key to the program’s success.

“In karate you always work with a partner,” she said. “But it’s a lot less stressful to work with your own parent as partner, because they know how to adapt instructions to their own child. And that’s why this works: the parent is always there to support their child.”

All participants must be accompanied.Brothers and sisters are welcomed.

Martin C. Barry is a Montreal-based writer/photographer with 23 years of experience covering issues all over the region. 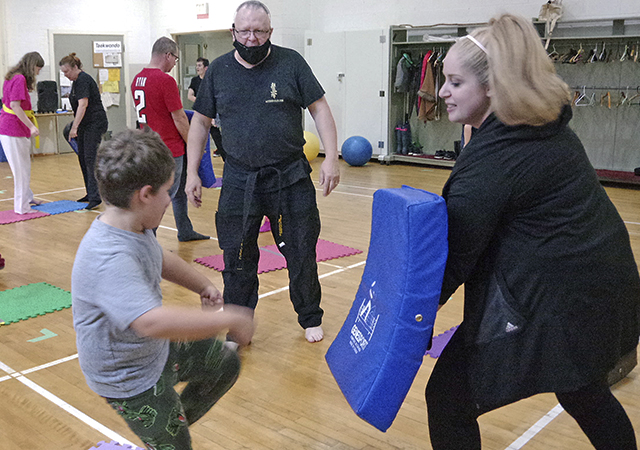 Seen in the foreground, program newcomers Liam Dandurand (left) and his mom, Allie Angrave (right), practice a karate kick during their first class, under the supervision of Autisme Karate instructor André Langevin.